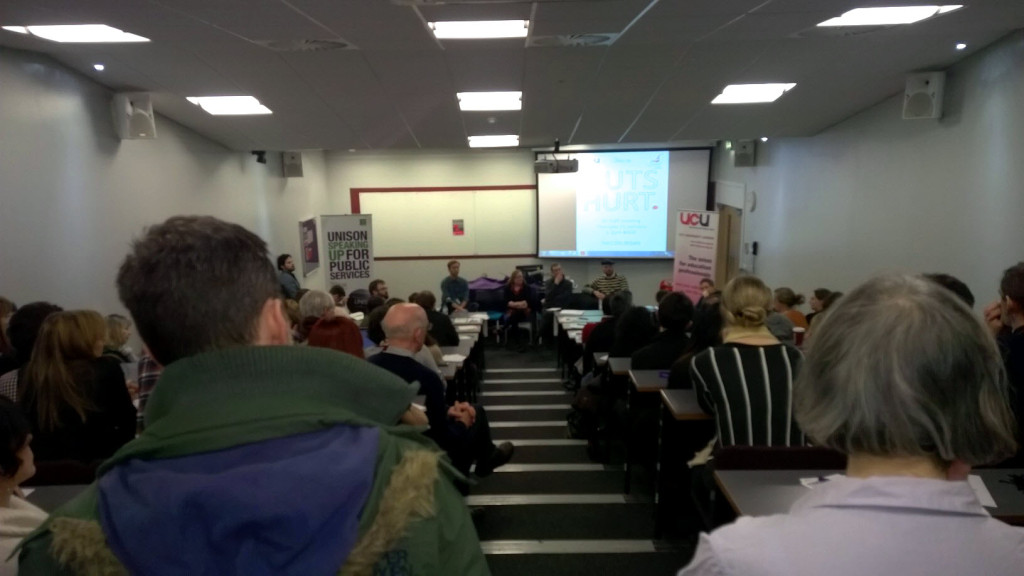 Over 100 academic and professional members of staff from all grades attended a meeting jointly organised by the three trade unions at City in response to news about proposed budget cuts to professional services of up to 9%.

Click here to read the notes from the meeting.

In November the Government published the Green Paper, Fulfilling our Potential: Teaching Excellence, Social Mobility and Student Choice. This, along with changes announced by George Osborne in the Spending Review are widely seen as heralding a root and branch transformation of Higher Education. This transformation has several aims.

A government priority is to pave the way for new entrants into the sector, including existing global for-profit providers, such as the Apollo group, by lowering the threshold for entry. The US experience (see for instance The Harkin Report) shows that the entry of for-profit providers is especially harmful for students from disadvantaged backgrounds, who are most likely to succumb to the aggressive marketing that is used by these organisations and enrol in unsuitable courses, after which they are left encumbered by debt that they cannot pay off. As this debt is underwritten by the state this situation is lose-lose. For-profit universities are equally disregarding of their staff, with lecturers paid for teaching only, often working remotely seeing neither students nor colleagues. None are given research time.

To facilitate new entrants into the sector the government is determined to make it easier for existing institutions and departments to fail, with an entire section of the Green Paper devoted to ‘Provider exit and student protection’. In the government’s words (p.54):

In a changing and more competitive sector, providers that innovate and present a more compelling value proposition to students will be able to increase their share of total students – in some cases this may be at the expense of other institutions.

Continuing to support providers that are struggling is undesirable for various reasons. Difficulty attracting students or poor quality provision would not be in the long term interest of students, and could damage the reputation of the sector. Removing provision may indeed lead to it being replaced by higher quality provision.

If university exit has thus far been frustratingly difficult for the government to achieve, the new Teaching Excellence Framework (or TEF) has been designed to change this. Despite its name, as currently conceived the TEF is not a measure of teaching, but of a range of somewhat cobbled together ‘metrics’. In the first instance these are likely to include employment and earnings at six months post-graduation, retention and continuation and student satisfaction (see Mark Leach’s visual guide to the TEF). Universities will also be required to meet widening participation criteria. Success in the TEF will allow universities to raise fees (albeit within limits); failure will constrain this, and threaten the viability of courses, and ultimately institutions.

The objections to this crude process are manifold and many have been well rehearsed. For instance, earnings are only marginally related to teaching or anything else that a University does, and much more strongly related to a range of other things, including social networks formed before as well as during university (various criticisms of using graduate ‘outcomes’ is outlined here). Similarly student satisfaction, as currently measured by the NSS rarely highlights important quality differences. For instance a report for HEFCE suggested that ‘in most cases, the differences between whole institutions are so small as to be statistically and practically insignificant’ (p.4). Once the NSS (in its current or revised form) feeds TEF it is likely that small (insignificant) differences will be of increasing consequence, triggering ever more panicked management responses. Moreover, as the TEF develops and the measures used are ‘refined’ it is likely that, as happened with the REF, the bureaucratic burden will increase, requiring increasing organisational resources and staff time.

While the prioritisation of widening student participation is welcomed, the lack of any resources to achieve this is notable. Instead George Osborne’s Spending Review cut approximately £380 million currently set aside as ‘Student Opportunity Funding’ targeted at disabled and the poorest students. In this context it is likely to be much easier for institutions with otherwise privileged students to funnel resources towards a small cohort of ‘widening participation’ students, ensuring their success, than it will be for universities with large numbers of working class students all calling on limited resources.

Meanwhile for those whose primary concern is research, the Spending Review was equally worrying. Building on the Nurse Review the proposal is that an overarching body is created Research UK (RUK) to replace the various research councils. This body will operate with much closer links to the Department of Business Innovation and Skills and with ministerial priorities. This is already apparent in the ring-fencing of 1.5 billion research funding for ‘Global Challenges’. While this may not concern you if your research fits within government priorities (although what these are remains somewhat unclear), it is likely to herald serious cuts to public funding for arts, humanities and (critical) social science. In the longer term it poses a threat to academic freedom.

Other changes, not discussed above, will have a huge if not yet fully defined impact on particular departments or disciplines. For instance the removal of grants for nursing students and their replacement with loans and an unregulated market.

So, what will that mean for us at City? The first thing is that since none of these plans are fully fleshed out, in the immediate future it will produce uncertainty. Senior managers at City and elsewhere are desperately trying to position themselves in what they think will be the new market. But in lieu of any concrete evidence of what success will require, this amounts to little more than rearranging the deck-chairs.

Past experience suggests, however, that these changes are likely to ramp up the pressures on us all to be ‘excellent’ in ever-expanding ways, since in a marketized HE sector the costs of ‘failure’ will be greater. This may mean that we are held responsible for things that are largely outside our control – for ensuring excellent NSS outcomes, for student ‘employability’ (notwithstanding cuts to the Careers service), for chasing harder after ever-diminishing pots of research funding. In this context we need to be vigilant about resisting further performance management (such as management’s inappropriate use of the ARQM).

As a union we must also reassert the value of higher education and of research, whether or not this fits with the government’s short-term priorities.

We will be posting further updates to this blog and encourage members to contribute, for instance by sending us their experiences or commentary.

We encourage City UCU members to register to attend The Second Convention for Higher Education on ‘The HE Green Paper: The Threat to the Public University …and what we can do about it’ at UCL on Saturday 27th February.

John Holmwood’s ‘Slouching towards the market’

THE The higher education Green Paper: Everything you need to know’