At the AGM on 7th June, members of the City UCU branch elected their new branch committee members for 2016-17:

Congratulations to all committee members and branch officers on their election.

A post by Chris Flood, second of two posts in which City UCU members explain their position on the EU referendum.

The EU is an economic and political bloc acting in the interests of big business in Europe. While it is true that, particularly during the Thatcher era, the EU sometimes seemed to represent a softer form of capitalism, and some legal protections for workers were made through it, this era of so-called ‘social Europe’ is well and truly over. The EU now is at the forefront of globally applied austerity measures, and attacks on workers’ rights.

Even as the referendum debate is taking place EU representatives are locked in secret discussions with US representatives over removing “barriers to trade” between nations. Such ‘barriers’ include health and safety legislation and preservation of what remains of the public sector. The King’s Fund has recently stated that the NHS could not be exempted from EU procurement or competition rules, meaning it must be privatised.

Some trade union leaders’ support for the EU on the spurious grounds of defending workers’ rights ironically comes soon after the TUC and most of the trade union leaders failed to lift a finger to stop the Tory government ripping up the right to strike of millions of British workers with the Trade Union Act. That weakness and indecision is the real threat to British workers, not Britain withdrawing from the bosses’ trading club.

The EU is not internationalist either as we might like it to be. The EU is not Europe. On the contrary, the EU is a ‘Fortress’, doing everything it can – (including allowing refugees to drown in the Mediterranean) – in order to prevent those fleeing for their lives from Syria and elsewhere being able to enter the EU.

Nor does not the EU foster European solidarity within its borders; rather it increases tensions between different nations. It is a capitalist project attempting to impose unity between nations from above, in the interests of the capitalist classes of Europe, particularly the most powerful nations. It is increasingly neoliberal in its economics and undemocratic.

Over the last eight years the institutions of the EU – the hated ‘troika’ – have imposed terrible austerity and privatisation on the economically weaker countries of the EU – above all Greece, but also Portugal, Ireland, Cyprus, Latvia, Romania and others. The governments of these and other EU countries have used EU rules as the excuse for the misery they have imposed on their populations.

Working people have huge common interests over and above their individual nationality. We are all facing the same fight against low pay, casualisation, cuts and privatisation in every country of Europe. Successful movements in one country would have huge support, and be emulated, across the continent. That is why the institutions of the EU were desperate to force the left-led Syriza government in Greece to its knees in order to demonstrate to workers in other EU countries that there was no alternative to endless austerity. In the next few weeks we will see a surge of support for a new left wing coalition force in Spain – namely PODEMOS (meaning ‘we can’) in combination with Izquierda Unida – the United Left. The reality is under the current EU arrangements – that even this surging new political movement, that is opposing austerity in Spain, will be powerless to act – just as the hugely popular SYRIZA elected government was in Greece. In other words it will be forced to kneel before the demands of the EU, the World Bank and the IMF irrespective of the wishes of the people.

Nothing is certain in the next period we go into. There could be another recession very soon even. Clearly we will have to fight for our living standards even if there is a remain vote or brexit vote. It isn’t beyond our imagination to see a General Election called in the aftermath of the referendum and to see a Corbyn led popular ‘Peoples Government’ being elected.

A post by John Saunders, first of two posts in which City UCU members explain their position on the EU referendum. 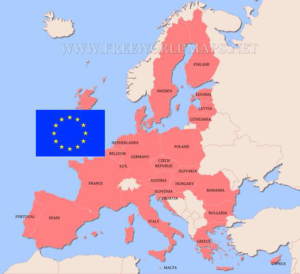 Let’s stay where we belong, in Europe as Europeans
My reasons for wanting the UK to remain in the EU are probably more emotional than rational. To me international cooperation is preferable to being an isolated little Englander and the EU is one way of embracing this. Collectively the European nations have provided opportunities for regeneration, improving human rights, workers’ rights and equality as well as broadening students’ education and encouraging research partnerships. The EU is not a perfect institution, but as a member, the UK both benefits and has the opportunity to make improvements. Outside the EU, we are a go-it-alone country (possibly without Scotland) but still at the whim of global forces.

Higher Education
Let’s leave aside the arguments about sovereignty and economics and focus on the benefits of working across European borders to our staff and students? Much of what follows has been taken from the Complete University Guide website and their paper “EU Referendum – How does the European Union affect universities and students?”

Staff and students from the EU
Large numbers of staff at UK universities, both academics and others, come from the EU; in some institutions 20% or more. This surely broadens the experience of both students and staff. Nearly 10% of City’s students come from the non UK EU and a recent study suggests that generally non UK EU students are high achievers.

Research grants and partnerships
The EU makes substantial financial contributions to research in UK universities; this is estimated to be close to £1b per year. This contribution continues to increase and in some cases the EU’s share of a university’s income is very substantial (as much as 15%).

Funding from the prestigious European Research Council (ERC) is allocated on the basis of research excellence and UK-based research has thus far secured over 20% of all funds disbursed. Four British institutions were among the 10 most successful recipients. Hence we can argue that the quality of UK research benefits from international contacts in both Europe and elsewhere. EU membership has encouraged the UK to be part of global teams of researchers and has fostered productive collaborations beyond the English-speaking world. As we learnt from the REF a higher quality of research is often associated with its international impact. Our position in Europe has allowed the UK to punch way above its weight in this area, both in terms of income and the world’s most highly-cited scientific research publications. We need to think carefully before putting our European and other international partnerships at risk.

Students
The EU’s freedoms of movement rules simplify the process of studying abroad for both UK and EU students. The Erasmus scheme, a student exchange programme operating since 1987, offers students in the UK and Europe a chance to study across the continent. At any given time, several thousands of students are involved in the Erasmus programme and, over time, hundreds of thousands of UK students have studied at European universities.

General
One cannot claim that if the UK left the EU, our students and staff would lose the benefits of international cooperation. But inside the EU we share in structures, resources and goodwill that encourage and support collaboration across EU member states and beyond. Leaving the EU is unlikely to improve, and could weaken, these opportunities.

Last Tuesday the branch held its AGM and the minutes of this meeting will be available shortly, along with the details of our new branch committee for 2016/17.

At the meeting, debate centred on the upcoming EU referendum, with a motion put forward to encourage members to a) vote and b) support the IN campaign. It was noted that there is no official UCU position on the EU referendum, although other unions have given public support for either the in or out campaigns. The conclusion of the debate was to allow two members, in their capacity as individuals, to state their case on this blog. Their posts follow!