As you may have seen in recent emails from the UCU, our newly elected General Secretary Jo Grady and our UCU branch President Keith Simpson, TWO BALLOTS ON INDUSTRIAL ACTION STARTED ON MONDAY 9 SEPTEMBER. 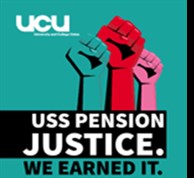 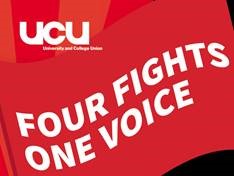 It is vital that members express their opinion on these disputes. Your elected branch committee and national executive voted to urge you to vote yes to strike action, and yes to action short of a strike for both the Pay and Equality Ballot, and the USS Ballot.

As there are two simultaneous ballots, I want to describe each dispute in turn, with some reference to what they mean here for us at City, University of London.

The Joint Expert Panel (set up following the last UCU industrial action protected defined benefit pensions) made seven recommendations, and remodelled the costs of them based on the new 2018 valuation USS Trustees made, confirmed contributions could return to 26% of salary, split between employers (18%) and employees (8%).

Employers, including City, are refusing to push for a full implementation of the JEP recommendations. Our management are facilitating higher employee (9.6%) and employer (21.1%) contributions unnecessarily.Schools and Professional services at City have already been asked to generate 2% more income and we know that for most departments this has meant cuts to budgets. However, City management have not challenged these added pension costs in a way that other University management representatives have done at the UUK. We need to raise the pressure on them with a credible threat of action.

In the previous industrial action on the USS pension, the union members across the country revealed faulty calculations and bad governance fed into an unwarranted proposal to undermine the basic set up of our pension. Bad governance in USS and UUK is still a problem, frustrating a solution that the employer’s own representatives on the JEP recommended in consensus with staff representatives.

We need to stand up against these choices with the credible threat of strike action.

Part of the USS pension valuation methodology assumed we were getting 4% pay rises every year, and would continue to get 4% pay rises in the future but we know that is not the reality. Last year was 2%,  2017- 18 negotiations were 1.7%, and the 2016-17 negotiations saw an offer of 1.1% revised from 0.9% after strike action. In each of these recent pay and equality negotiations, UUK have given empty promises on closing the gender pay gap, reducing precarious contract use, and alleviating at workloads.

As with many institutions around the UK, initiatives and programmes are in place at City but it has not been enough. Improvements have been slow at City and inequality is persisting or even rising in particular categories or job roles.

At Professorial grades, the Gender Pay Gap at City rose from a staggering 36.3% in 2016/17 to 38.0% in 2017/18. Meanwhile City increasingly relies on casualised workers such as VLs or colleagues on fixed term contracts with many at City concerned about their precarious position and second tier employment. Our colleagues on lower grades at City are in particularly difficult situations, with real term cuts over many years on already low salaries.

City does have money, however it is committed to maintaining a surplus each year as this makes us look healthy to creditors so they we can continue to borrow money for investment projects. For example, in last July’s financial report to council showed a £7.7 million budget surplus for City.

Holding back our pay is a choice made by management at City that affects the livelihood of staff disproportionately; especially those of us already in vulnerable and unequal positions such as women, BAME, disabled and casualised colleagues.

UCU has been negotiating with employers nationally with modest demands. We have offered a compromise but by offering 1.8% rise, well below inflation, they have failed meet us halfway. They have also not made any credible commitment for action on inequality or casualization.

We need to stand up against these choices with the credible threat of strike action.

City University London UCU wish to congratulate all those staff taking part in events to celebrate International Women’s day and urge staff to try and attend if possible. http://www.city.ac.uk/international-womens-day/events-celebrating-iwd

The origins of International Women’s Day lay with the trade union movement, in particular March 8, 1857, when garment workers in New York City marched and picketed, demanding improved working conditions, a ten hour day, and equal rights for women. Their ranks were broken up by the police. Fifty-one years later, March 8, 1908, their sisters in the needle trades in New York marched again, honouring the 1857 march, demanding the vote, and an end to sweatshops and child labour. The police were present on this occasion too. The trade unions and labour movement in the United Kingdom have been fundamental in fighting for equal pay and rights for women embodied in the Sex Discrimination and Equal Pay Acts of the 1960’s and 70’s through to the Equality Act 2010.

Unfortunately we still have a long way to go. Today the UCU unveil the real issues around the gender pay gap in Higher Education and Further Education institutions.

At City University we face real challenges. Sadly, City tops the league table for the highest professorial gender pay gap of all Universities in the United Kingdom with a £15,992 difference between male and female professors (Female salary as % of male = 83.6).

The UCU continues to argue at the University Equality Committee and the Athena Swan Gender Equality Working Group that the university needs to prioritise this issue and make a firm commitment to eradicate gender pay inequality.

UCU will be writing to the Vice-Chancellor requesting that we agree a joint statement of intent to close any gender pay gap at City University London by 2020.

After the university’s unsuccessful Athena SWAN application the Gender Equalities Working Group (GEWG) has been set up. Two members of the UCU committee along with other members of staff sit on this group.

We would encourage all members of staff to consider joining one of several staff groups, such as: